skip to main | skip to sidebar
"...I trusted in the Almighty… I knew I could only be killed once,
and I had to die sometime."
-Anne Bailey, 1823 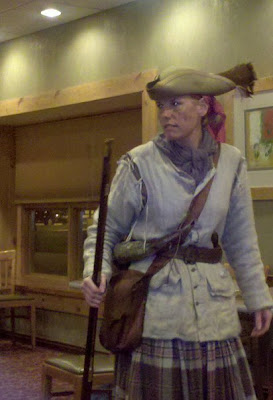 Mad Anne Speaking for the Indiana Sons of the American Revolution ~ November 2009
Mad with grief following her first husband's death in the Battle of Point Pleasant, Anne became infamous for handling a horse, a hatchet and a long rifle as well as any man on the frontier. Known as 'The White Squaw of the Kanawha Valley' to some, and 'Mad Anne' to others, Suzanne Dennis presents a 45 minute first-person characterization of the true story of 'Mad Anne Bailey; an American heroine'.

** The first person writings herein are of Ms. Dennis' experiences in her portrayal of Mad Anne, not the actual life of Anne Hennis Trotter-Bailey.

Just wanted to say thanks for forting up with us last week. Your persona and your portrayal added so much to our event. I don't know anybody who does what you do quite as well as you do it. (Yer good Sis!) I'll count myself and everyone else here at Fort Harrod lucky if you see fit to throw in with us next year. Your friend," John Curry

"Thank you for taking your day off work to go to our school to help us to understand what the Indians did to the French and English. It was cool. Your knifes were cool too. The furs were soft and cool too. Thank you so much."
Lexi, Grade 4


"Thank you for coming to do the program. I liked the part that you showed us the guns. Where did you get the neet clothesing. I liked the books you read about people captured by Indians"
Harrison, Grade 4


"Thank you for showing us the animal skins, guns, clothing, and other stuff. I hope you are careful on your trips. Thank you so much for teaching us a lot."
Hannah, Grade 4


In her 'real life' Suzanne Larner is the vice president of corporate communication for a real estate company in Indiana. In her spare time she is a storyteller, reenactor and hunter. She began black powder shooting and reenacting 7 years ago. In 2009 she placed 3rd as a novice in the Women's National Muzzle Loading Rifle Association competition. She is a certified NMLRA Range Officer, member of several black powder shooting clubs and the Seven Years War Organization. When she isn't working, shooting or hunting, Suzanne portrays the historical figure 'Anne Bailey'; an American heroine of the Indian Wars.

Contact Suzanne Larner:
317-402-7701
or
MadAnneBailey@gmail.com
Anne's speaking fee is typically $75. A portion of all fees and honorariums support The Purefinder Fund, a 501c3 not for profit, under http://www.parsonjohn.org/ to help reenactors in need. Another portion supports The American Widow Project. The American Widow Project is a non-profit organization dedicated to the new generation of those who have lost the heroes of yesterday, today and tomorrow, with an emphasis on healing through sharing stories, tears and laughter………Military Widow to Military Widow.

Thank you for your support and allowing me to donate to these causes! 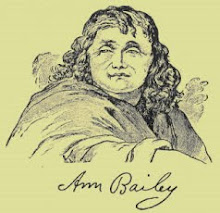 To book an appearance
by 'Mad Anne' contact:
MadAnneBailey@gmail.com

Mad Anne Bailey
torn from all whom I loved, traveling fort to fort carrying missives, tales and the spirit to fight the red savages soothes my ravaged heart.